COP CAR – In the Spotlight

“Cop Car” features two young teens (played by James Freedson Jackson and Hays Wellford) who run away from home at the beginning of the film. As they cross a long field and reach the woods, they encounter an abandoned car- and to their extreme delight- a cop car- with keys included. The two decide to take the car for a spin on their runaway journey, overjoyed with their good fortune.

Little do they know that this car is owned by Sheriff Kretzer, played by Kevin Bacon, which contains prized possessions in the trunk. After taking a short snooze in the woods only to wake up and find his car has vanished, Bacon spends the remainder of the film trying to track down the car and the cargo within.

The film, directed by Jon Watts, is shot on wide Colorado roads and fields, and the sparse land echoes the sparse dialogue in the film. But “Cop Car” is anything but an empty movie. Bacon carries the film, playing a Sheriff who is confusing for the viewer, at times part good, part evil, and certainly desperate. In Hitchcock style, viewers will find themselves sometimes rooting for Sheriff Kretzer, hoping he tracks down the elusive car. The young boys also do a fine job in the film, portraying two teens who begin a voyage light as air, without a worry in sight, to two young men who are very quickly faced with very adult challenges and issues. 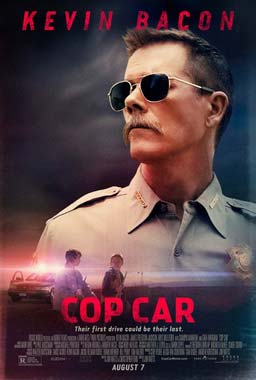